How to get work permits in Canada 2022 the easy way. 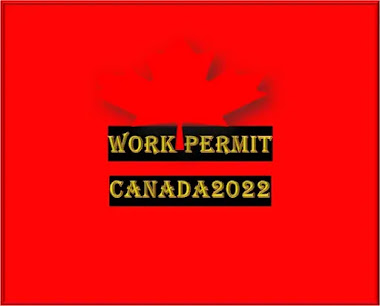 Hundreds of thousands of work permits in Canada are issued by the Canadian government from around the world each year.

Canada is working to attract human talent to raise economic and social profitability.

Canada issues work visas so that foreign workers can support its economic and labor market needs. Work permits are also issued for social reasons, such as bringing families together in Canada, and to strengthen cultural ties with partner countries.

To support the goals of this policy, Canada offers more than 100 different work permit pathways.

Information about work permits in Canada

The TFWP was established to address the labor shortage in Canada. Labor managers must prove to the Canadian government that the employment of a foreign worker is due to the lack of suitable workers in Canada.

To prove this, they must complete a labor market test, which is called a Labor Market Impact Assessment (LMIA).

The Canadian government must then confirm that the employment of the foreign worker will have a positive or neutral effect on the Canadian labor market.

Once this is confirmed, the foreign worker can go ahead and submit a work permit application to Immigration, Refugees and Citizenship Canada (IRCC).

Whereas, the International Mobility Program (IMP) was created to advance the diverse economic and social interests of Canada.

However, LMIA is not required under the IMP. Alternatively, foreign workers eligible under the IMP can apply to IRCC for a work permit.

Some foreign workers are entitled to forgo this step and travel to Canada to work for a short period of time.

The many pathways that fall under the IMP are the result of many Canadian Free Trade Agreements and local policy interests. For example, the Canada-United States-Mexico Agreement (CUSMA, formerly known as NAFTA) is a landmark free trade agreement that allows US and Mexican citizens to work in Canada without an LMIA.

It is reported that young people from all over the world are able to work in Canada under the IMP program due to youth mobility agreements between Canada and industrialized countries.

Canada also allows its residents, such as international graduates, and eligible spouses or partners to obtain work permits under IMP because Canada wants them to have local work experience and the ability to support themselves financially while they are in the country.

Work permits in Canada under the TFWP

Obtaining a work permit under the TFWP is a manager or employer-led process.

The employer must have a job vacancy and decide that there are no suitable workers in Canada for the job.

The employer must then apply for an LMIA and receive a positive or neutral evaluation.

Once this is secured, the foreign worker can submit the job offer letter, LMIA letter and all other additional documents to IRCC for a work permit.

Note that work permits under the TFWP are for the employer, also referred to as “closed”.

This means that a foreign worker can only work for the employer who hired him and for a period of time approved by the Canadian government.

Work in Canada under IMP

Unlike the TFWP, a foreign worker who falls under the IMP can go and work for any employer of their choice (but this cannot be generalized for everyone).

Common reasons to be eligible to work in Canada under the International Immigration Program:

• CUSMA: US and Mexican citizens may be eligible for concessional processing when applying to work in Canada.

• In-company transfers: This allows some employers to transfer workers to their offices in Canada.

• Television and Film: Canada welcomes the entertainment industry to support its burgeoning television and film industry.

• Entrepreneurship: Foreign workers who can prove that they meet certain conditions, such as staying in Canada for less than 6 months and not entering the Canadian labor market, may be eligible to work in Canada without the need for a work permit.

• Bridging an Open Work Permit (BOWP): Eligible and qualified skilled workers who live in Canada can apply for a BOWP while their permanent residence application is being processed.

In addition, eligible spouses or partners of Canadian citizens or permanent residents can receive a BOWP if they live in Canada.

• Postgraduate Work Permit (PGWP):  The PGWP is the most common work permit under the IMP.

Eligible international graduates from designated Canadian educational institutions (such as colleges and universities) can obtain a PGWP for up to 3 years.